On this page you can read the first chapter of the book Easy Interval Method. It is the Foreword, written by by Russ Mullen, Sussex, UK.

"For most runners, the thrill and satisfaction of the simple act of running holds our attention for only so long. It is quickly consumed by the desire not only to run but to run faster! Whether you are a novice just trying to run an entire 5km or an elite dreaming of breaking 30 minutes for 10km, the goal is the same: it must be faster.

Running is one of the few sports where success and failure can be so black and white. Most people will never win a race against others. But you will never stop racing against yourself. If you complete the same course 10 seconds quicker than you ever have before, then you have undeniable evidence that you have improved. You’ve beaten yourself; you win. Conversely, the damning and bleak reality of failure is equally harsh. You didn’t win. But you will be back. All runners, no matter what their level, share these common feelings of success and failure and the single-minded determination that you will, one day, be faster than you were before.

I had been running competitively for nearly 10 years and managed to run times ranging from 9:35 (3km), 16:15 (5km), 33:29 (10km) and 1:15:11 (half marathon). I ran these in 2014 at 28 years old and had stagnated since then; actually, if brutally honest, regressed. I would constantly feel sluggish and slow and never ran a race I was happy with for three years. This all changed thanks to a completely different way of training: the Easy Interval Training Method.

I first came across the Easy Interval Method in December 2016 and was immediately intrigued. Within six months of training this way I have since run 3km in 8:59, 5km in 15:44 and 10km in 32:51. I have been truly amazed by these improvements as I’ve not only got back to my previous best but I have surpassed it at every distance I’ve run. I feel stronger, healthier and happier about all aspects of my running. You can read more about my story in chapter 2.2.

In this book you will read everything about this unique way of training. It is written by a man who has trained and competed at a level that most can only dream of. Klaas Lok won a staggering 24 Dutch titles from 1975 to 1985, and achieved times that, even today, would still rank him in the upper echelons of the world’s elite distance runners.

In the following pages Klaas shares his first-hand knowledge and experience of competing and training at a world-class level with a goal that all runners, no matter how fast or slow, can share: the goal to be faster than you were before. His insights provide thoughtful and unique ideas into the approach he personally used under the tutelage of his coach, Herman Verheul, and while there are no guarantees that following these ideas will turn you into a national champion, I do believe they will provide a thought-provoking insight into a unique and intuitive way of training that will lead to improved performance, health and enjoyment in your running, whatever your level."

How to order the book Easy Interval Method 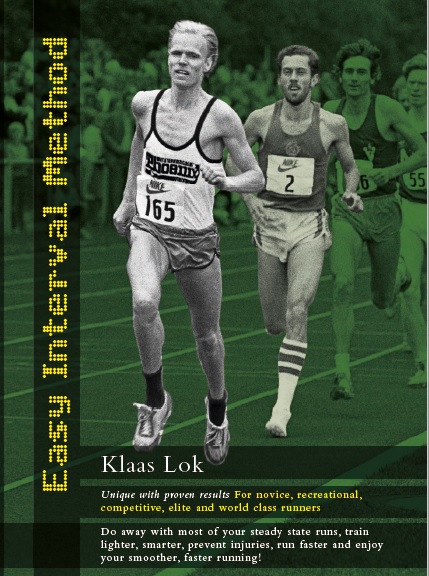 The book is available on Amazon since July 2019. Don't get discouraged by any stated long delivery times: delivery is usually much faster!
In the UK you can also order directly from the author, via translator Russ Mullen in Sussex, UK (e-mail address below).
In Holland you can order via this link

Click for your country (or the nearest country) to order via Amazon:
Germany or USA or Canada or Australia or United Kingdom.

Discount
Only in the UK and Ireland you can also order (with a discount - not 13.95 but 11.95 pound!) directly from author Klaas Lok and translator Russ Mullen. For orders of 10 or more there will be more discount; also contact Russ Mullen to discuss this (he lives in Sussex, UK).

Any owner of a running website (preferably with a large e-mail list) in any country who is interested in a business deal to distribute large numbers of the book, don't hesitate to contact the author. You can contact Klaas Lok also for other questions.